What is DaVinci Robotic Surgery?

The DaVinci Robotic Surgery system is a robot-assisted surgical system that allows surgeons to perform minimally invasive complex surgeries with extreme accuracy and upgraded precision. This is a massive improvement over our traditional form of laparoscopy. Traditional laparoscopy consists of the surgeon using standard hand-held instruments. Also, during conventional surgery, the doctor must remove his eyes from the patient to look at a monitor that shows digital imaging through a 2D image.

How does the DaVinci Robotic System Help Surgeons?

The key areas in which the DaVinci Robotic System aids a surgeon are in dexterity, precision and accuracy, visual aid, and much more. Compared to your traditional surgery, a doctor will now be comfortably seated within his chair at the console. Visual aids are present through the use of multiple monitors and consoles. Robotic arms are used that mimic the surgeon’s hand movements with extreme pinpoint precision. In order for his visuals to change or for the robotic hands to be moved, the doctor uses his hands to reposition. The robotic arms will follow the surgeon’s hand movements and so will the camera. 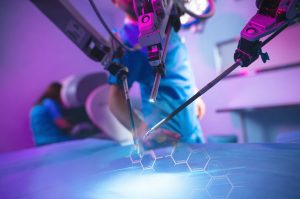 There are multiple key factors that make this robot-assisted procedure more valuable for surgeons than your traditional laparoscopy: